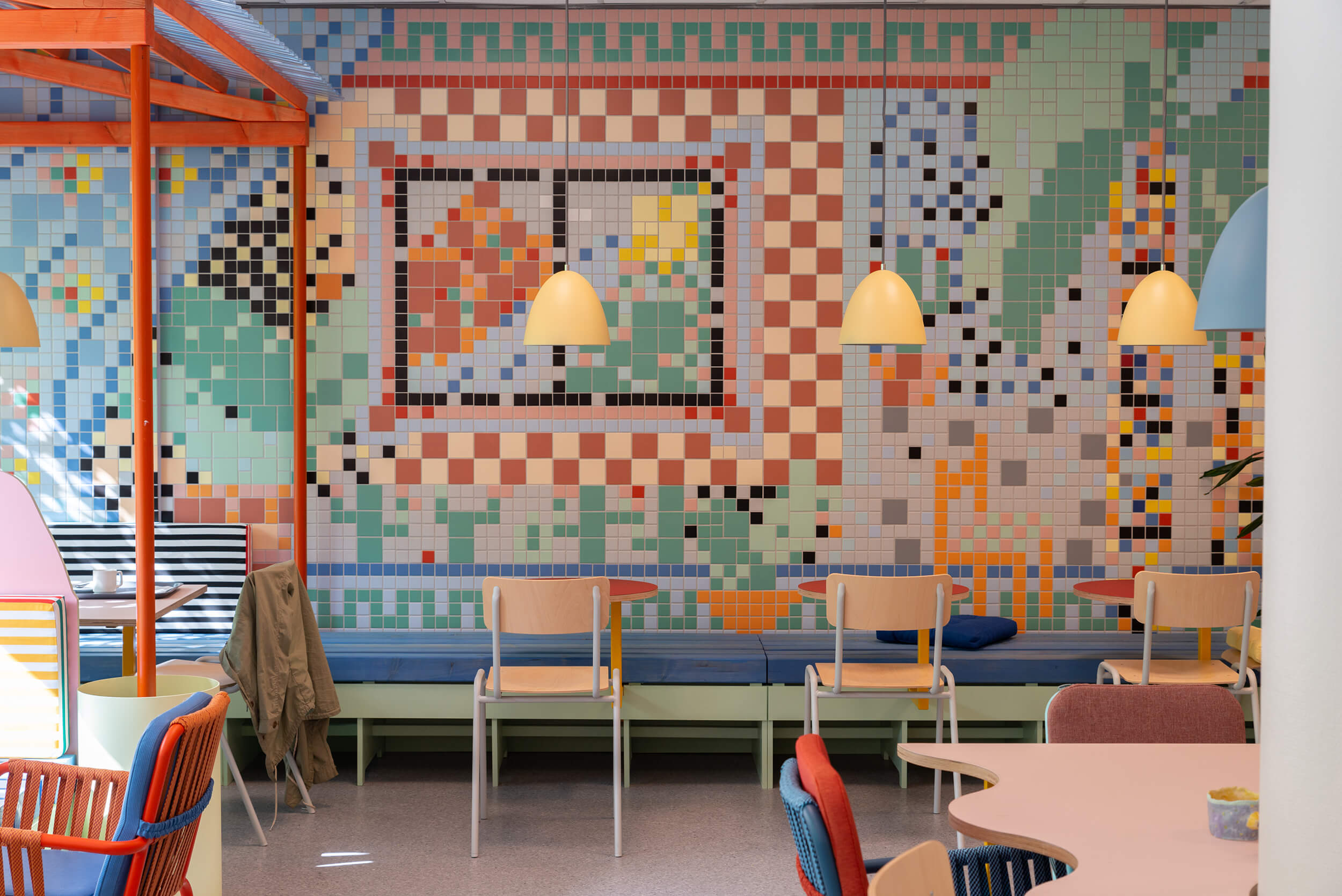 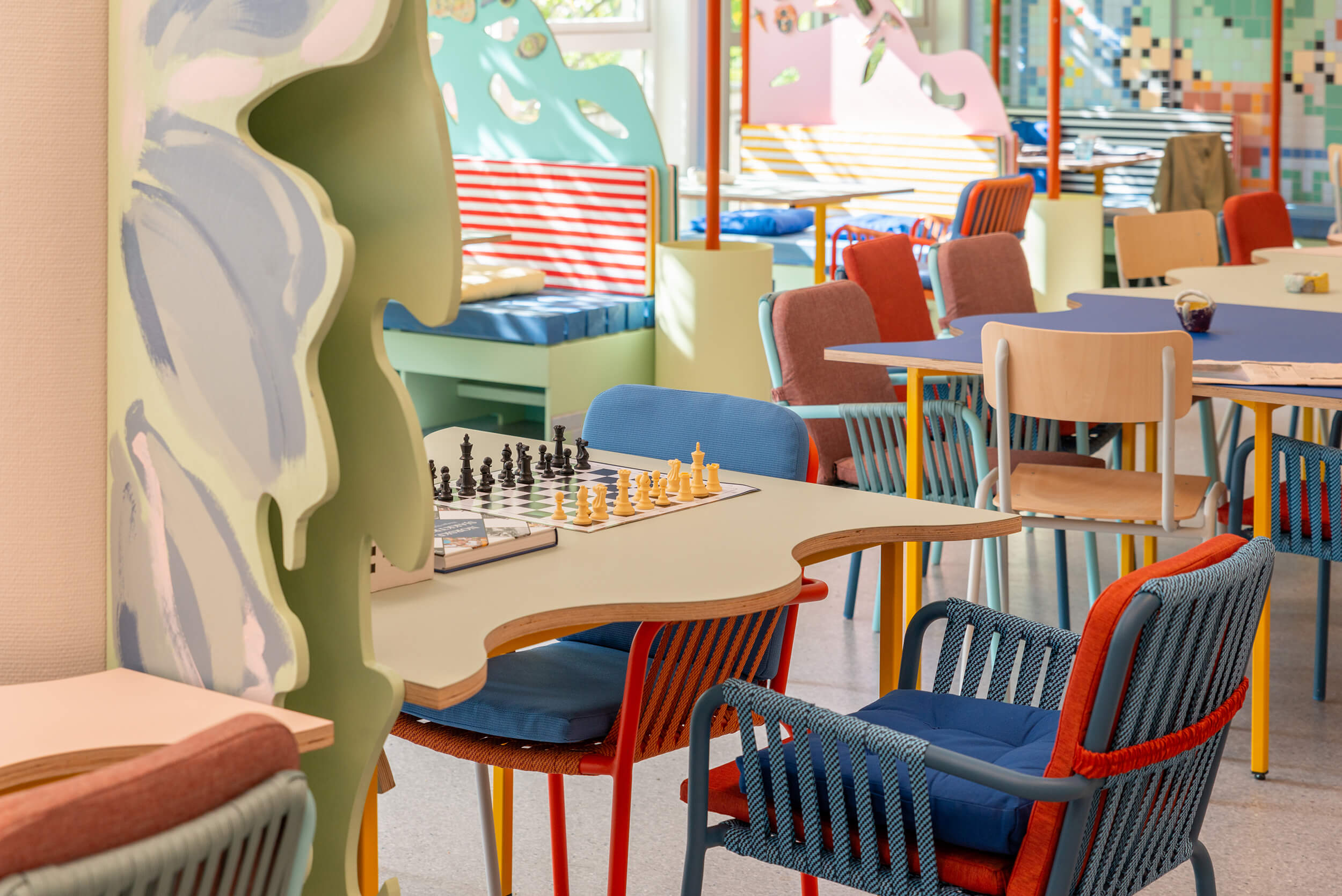 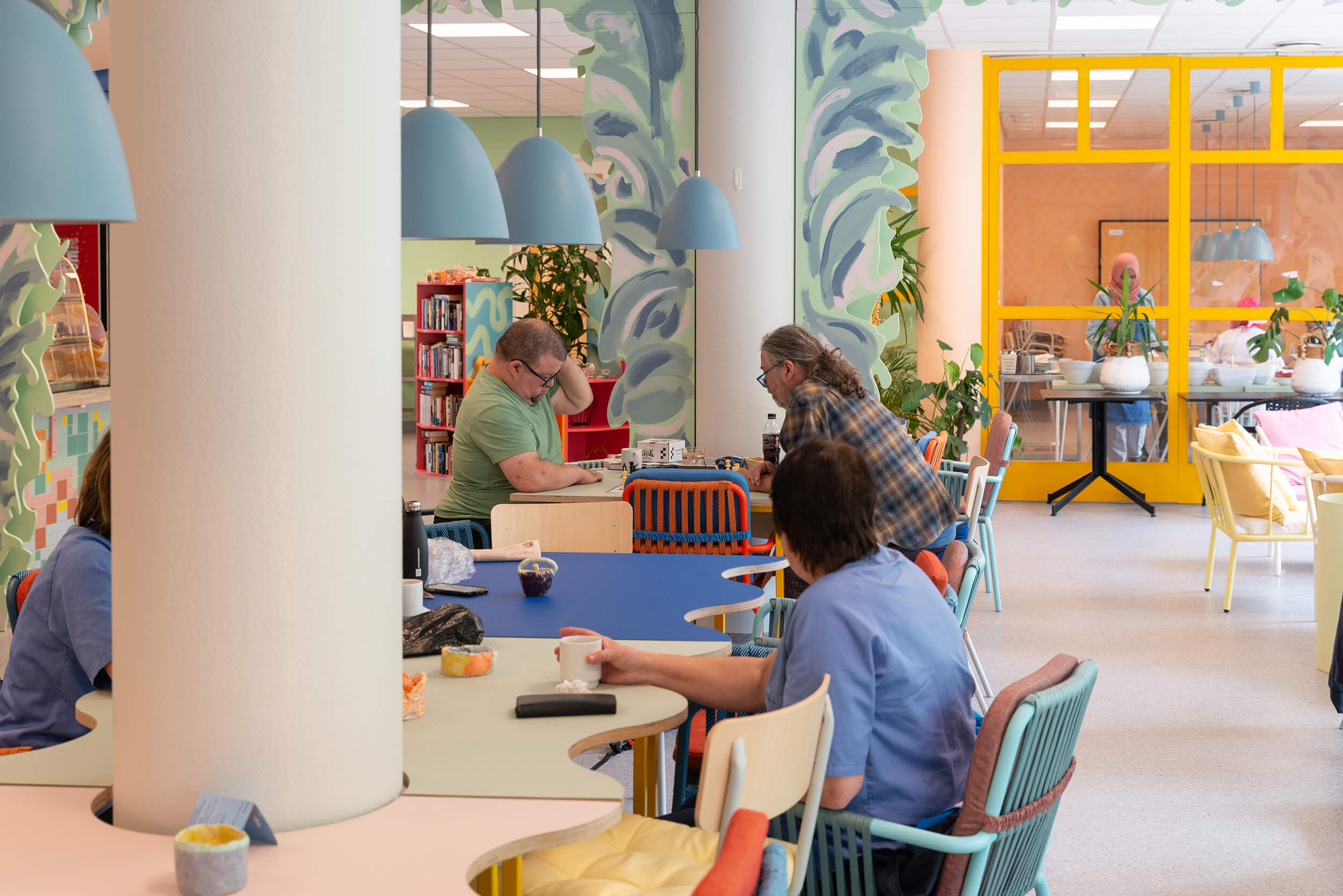 Sol Calero presents La Cantina de la Touriste (Tourist Canteen, 2022), a vibrant, permanent installation that reimagines the interior environment of Kafé Mat & Prat. Run by Ny Sjanse (meaning “new chance”), Kafé Mat & Prat is a qualification centre for immigrants in Bergen that teaches language skills while also providing a framework for economic livelihood via training in management, service, and cooking. Located in Engen Behandlingssenter (Engen Care Home), the canteen is visited by residents of the care apartments, as well as the people of Bergen, who come to eat cuisine from the participants’ home countries.

Calero’s extensive redesign, created in close conversation with Kafé Mat & Prat’s community, invigorates an existing project with meaningful social benefits, allowing visitors and participants to become, momentarily, tourists in their own city. With a bright, tiled wall mural, hand-painted furniture, and room dividers that recall somewhere south of Norway, Calero’s imagery reflects her interest in tropical aesthetics as well as those of applied design, and determinations of the self-consciously “exotic.”

In Norwegian, the concept of “Syden” (the South) is used to denote a southern holiday destination where it is always sunny, with umbrellas, beaches, and swimming pools. This is an imaginary place that amalgamates any place to the south of Norway; Syden is therefore everywhere south, and yet, at the same time, it is, in reality, nowhere. Such passive projections of place, loaded with generalisations, flatten all complexity and cultural specificity.

Calero’s Cantina attempts to turn this superficiality on its head, creating a lasting spatial gesture for social exchange and sustainable community relations by imbuing the formerly institutional space with a welcoming, colourful atmosphere.

Sol Calero creates site-specific installations that work as spaces for gathering. She often uses opulent three-dimensional tableaus, and has staged situations as far-ranging as a school, spa, and currency-exchange office. Calero’s works are at once vibrant, bright, and playful, while also examining the political overtones of themes such as cultural representation, national identity, exoticism, and marginalisation.

Her Venezuelan background has influenced an interest in looking at cultural codes or clichés from the Latin American context that proliferate and change, as well as the ways in which visual symbols can undergo transformation.