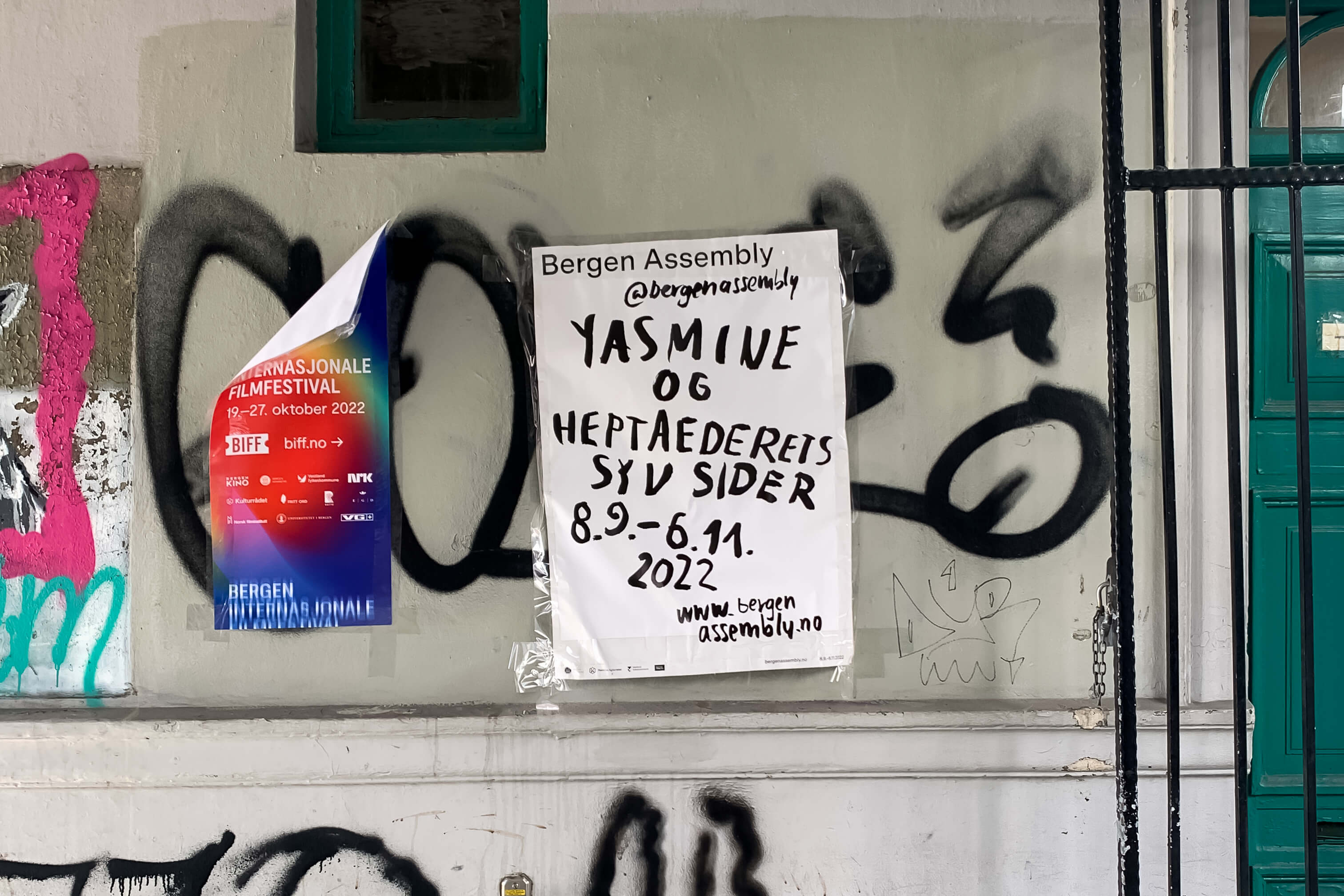 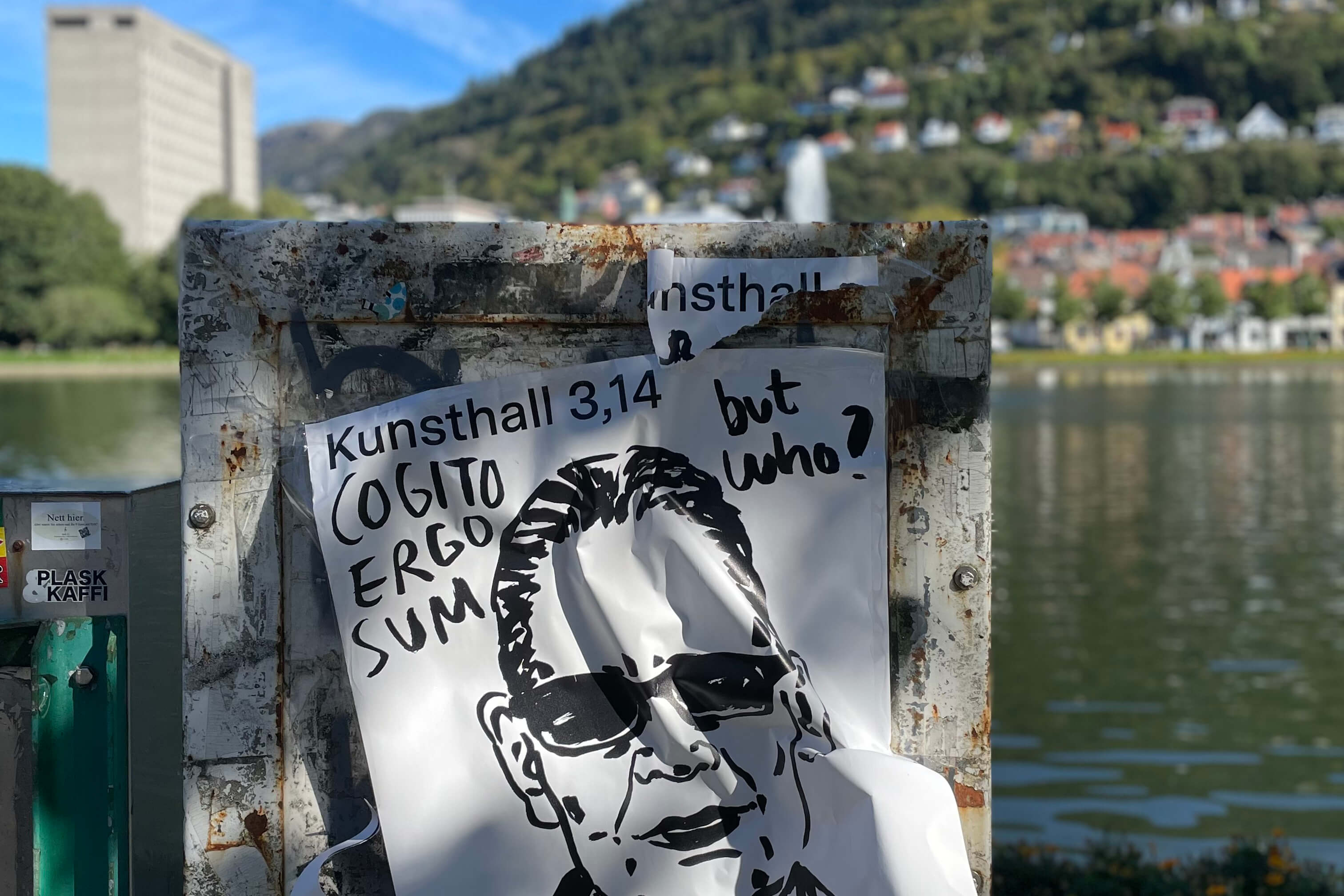 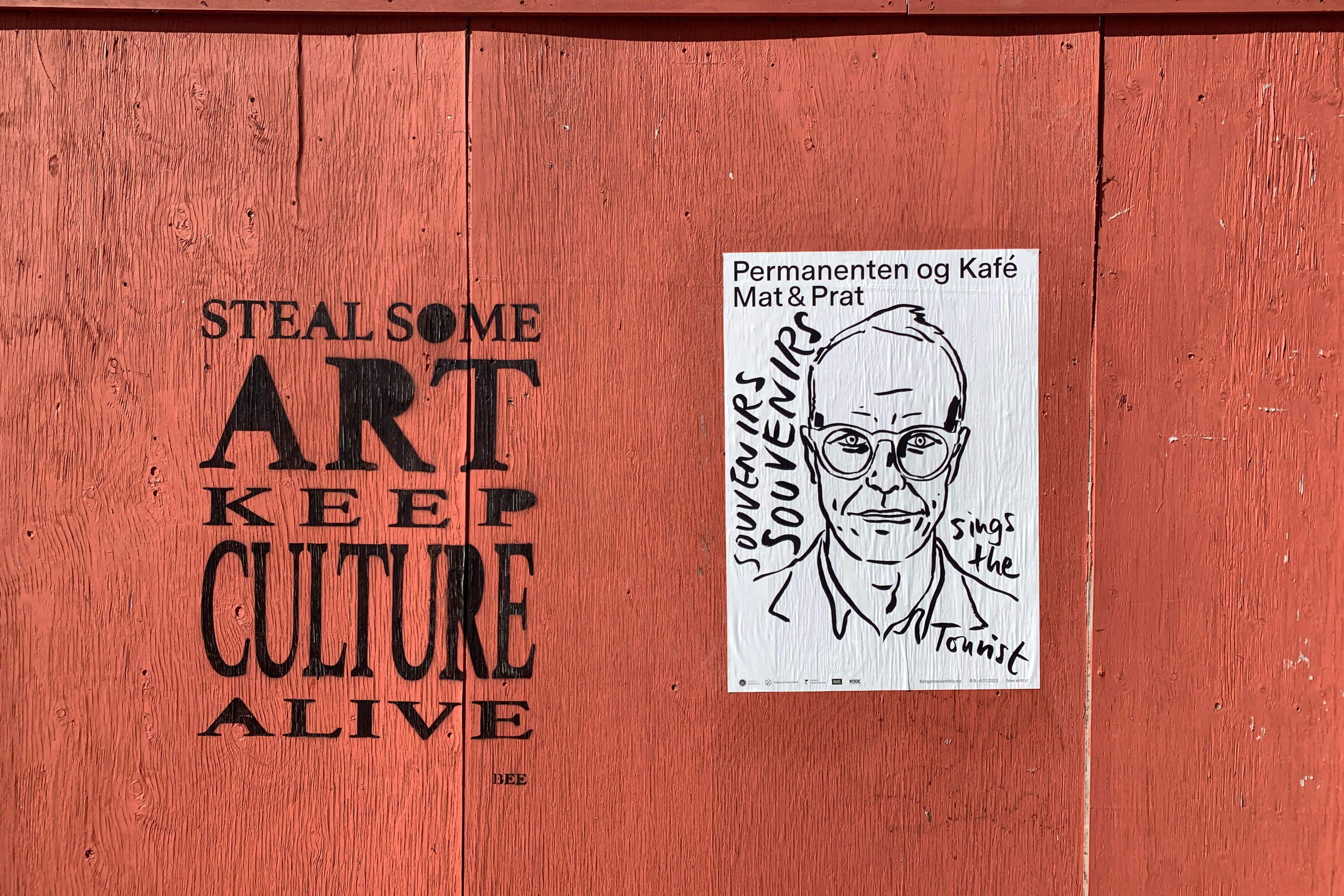 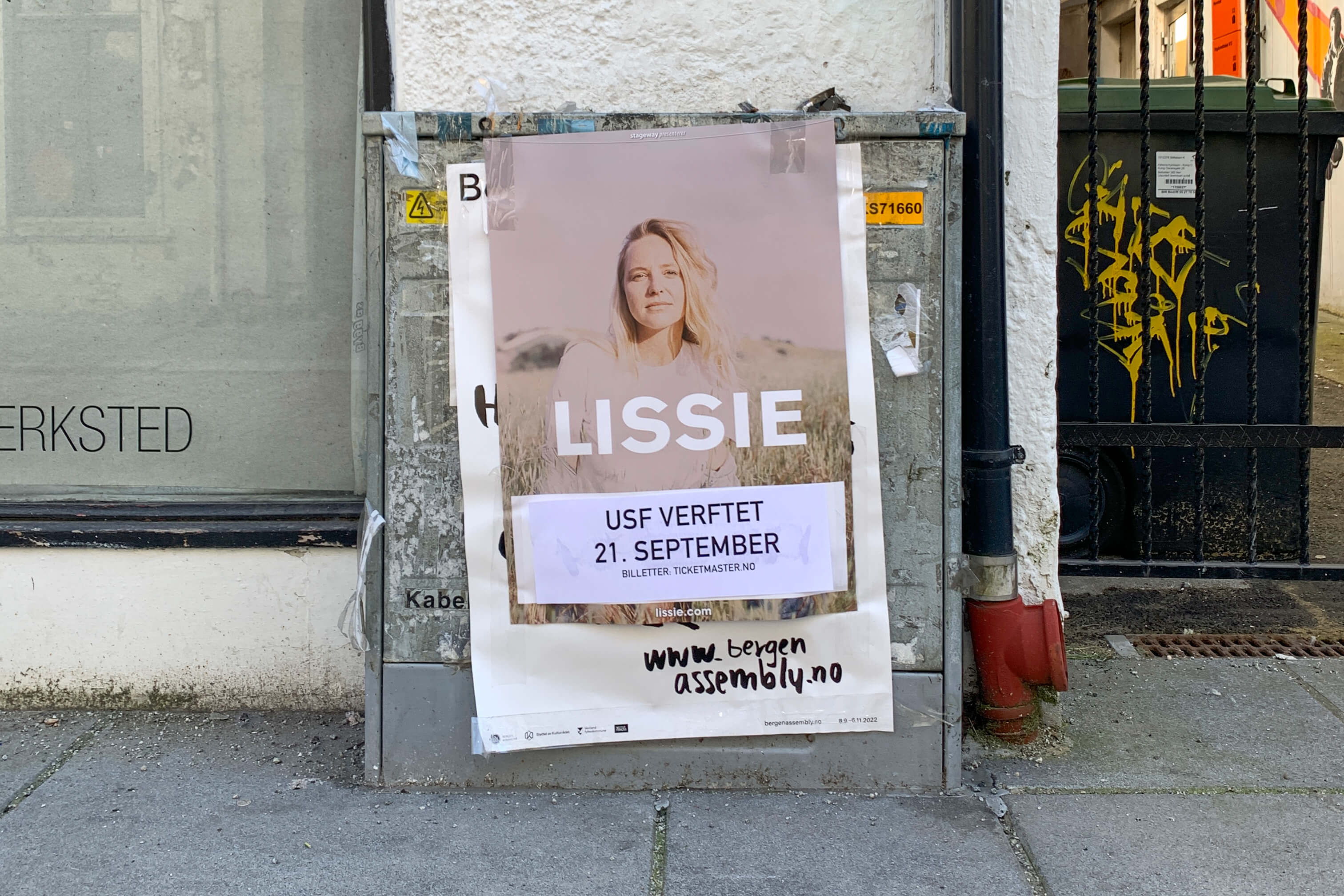 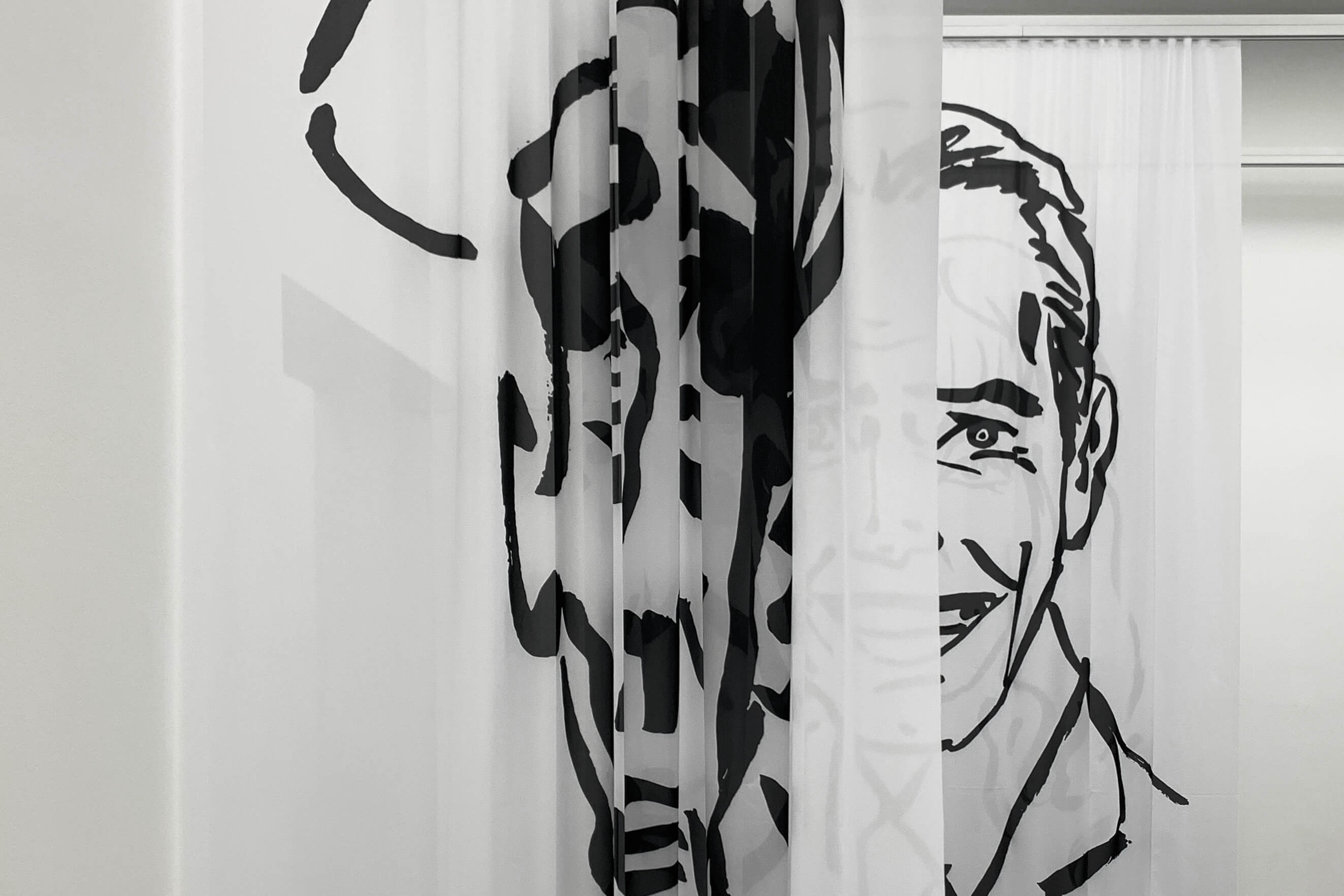 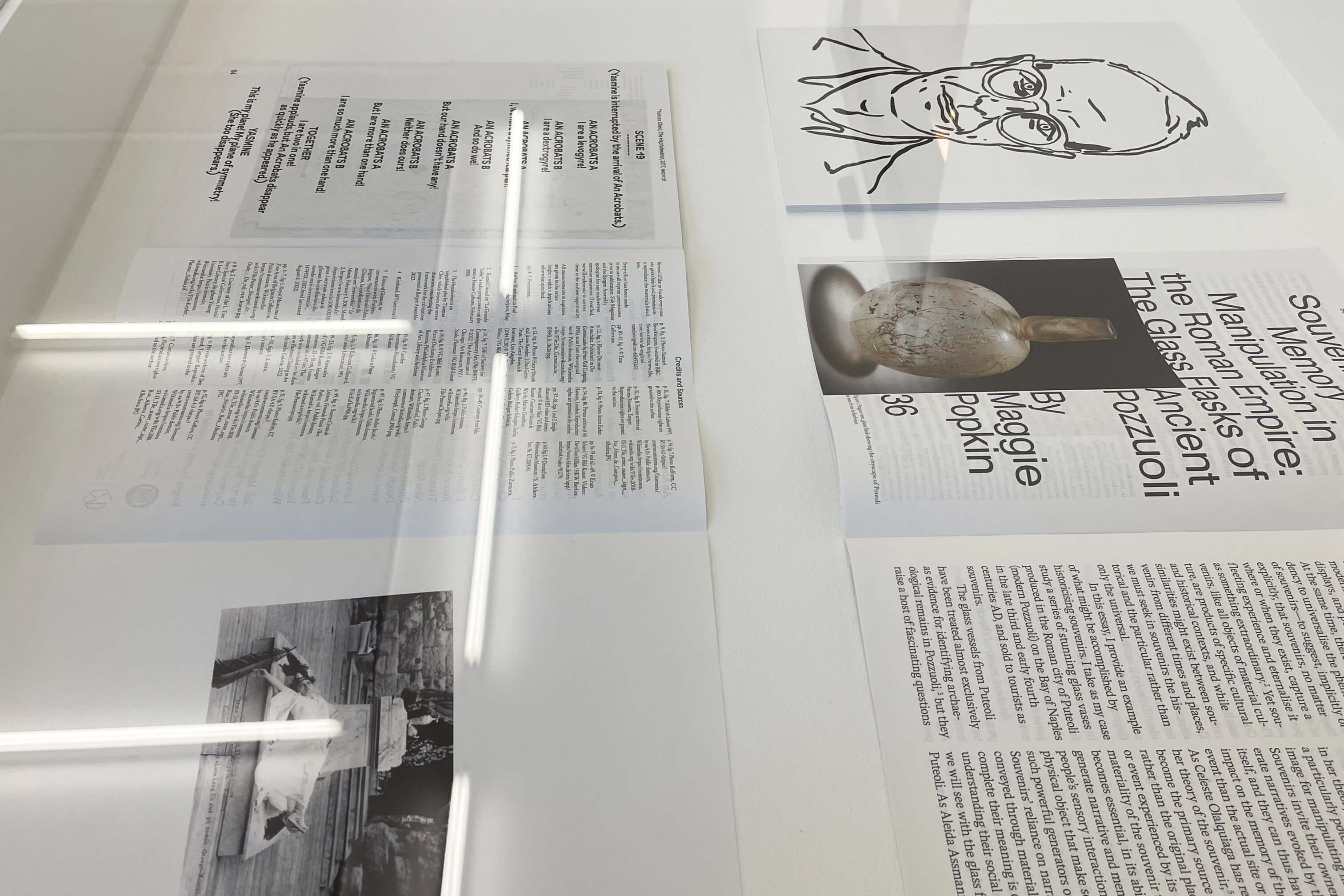 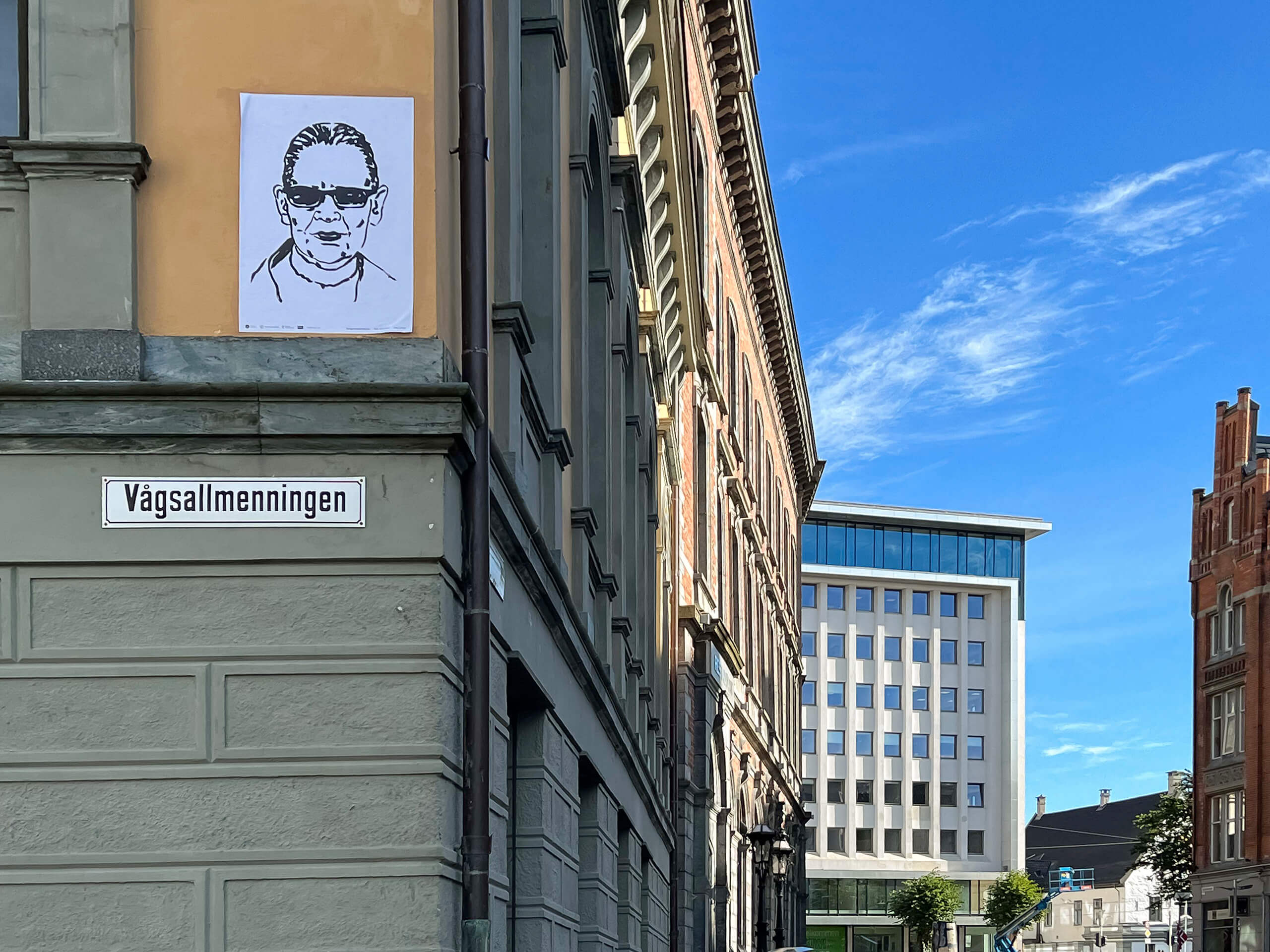 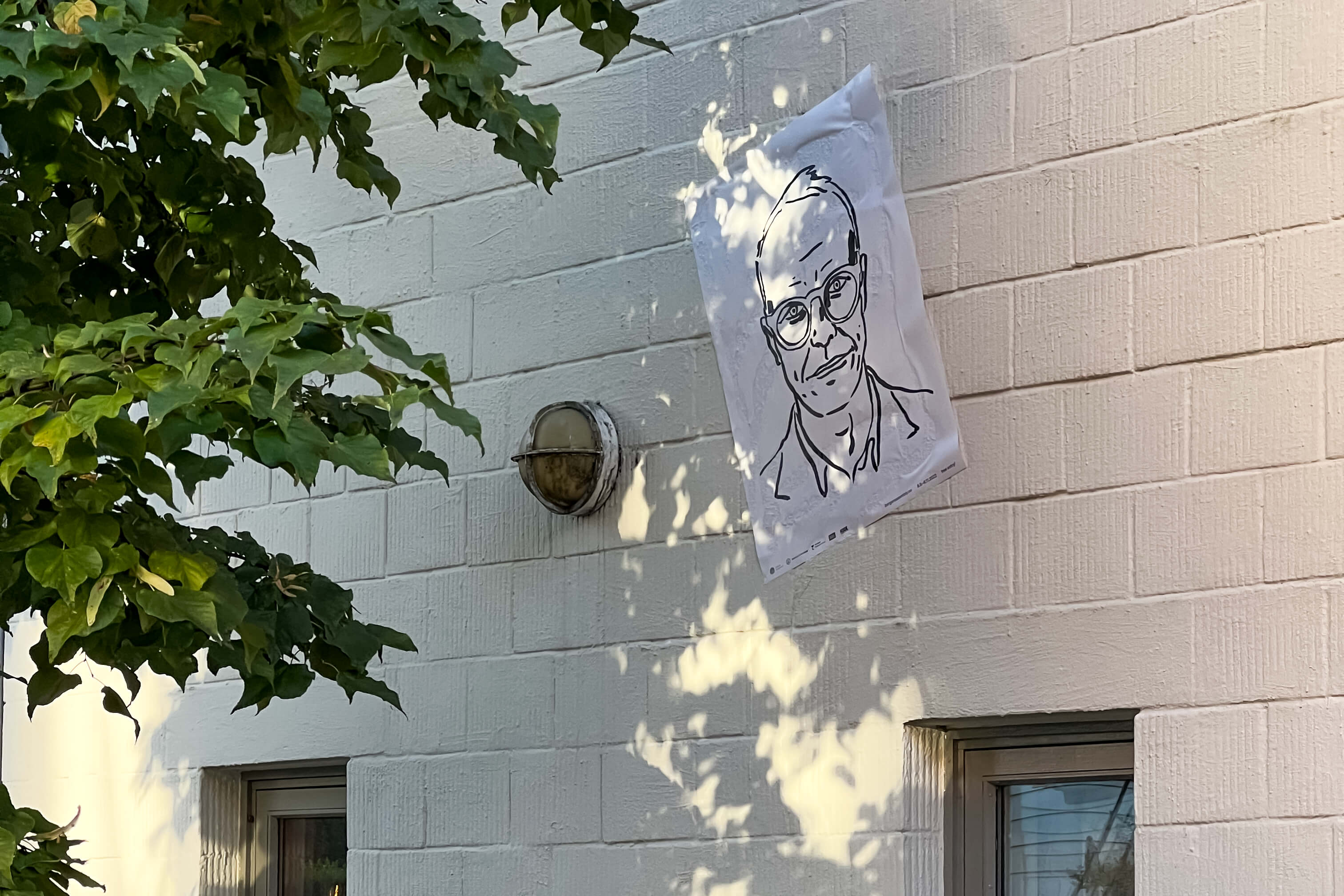 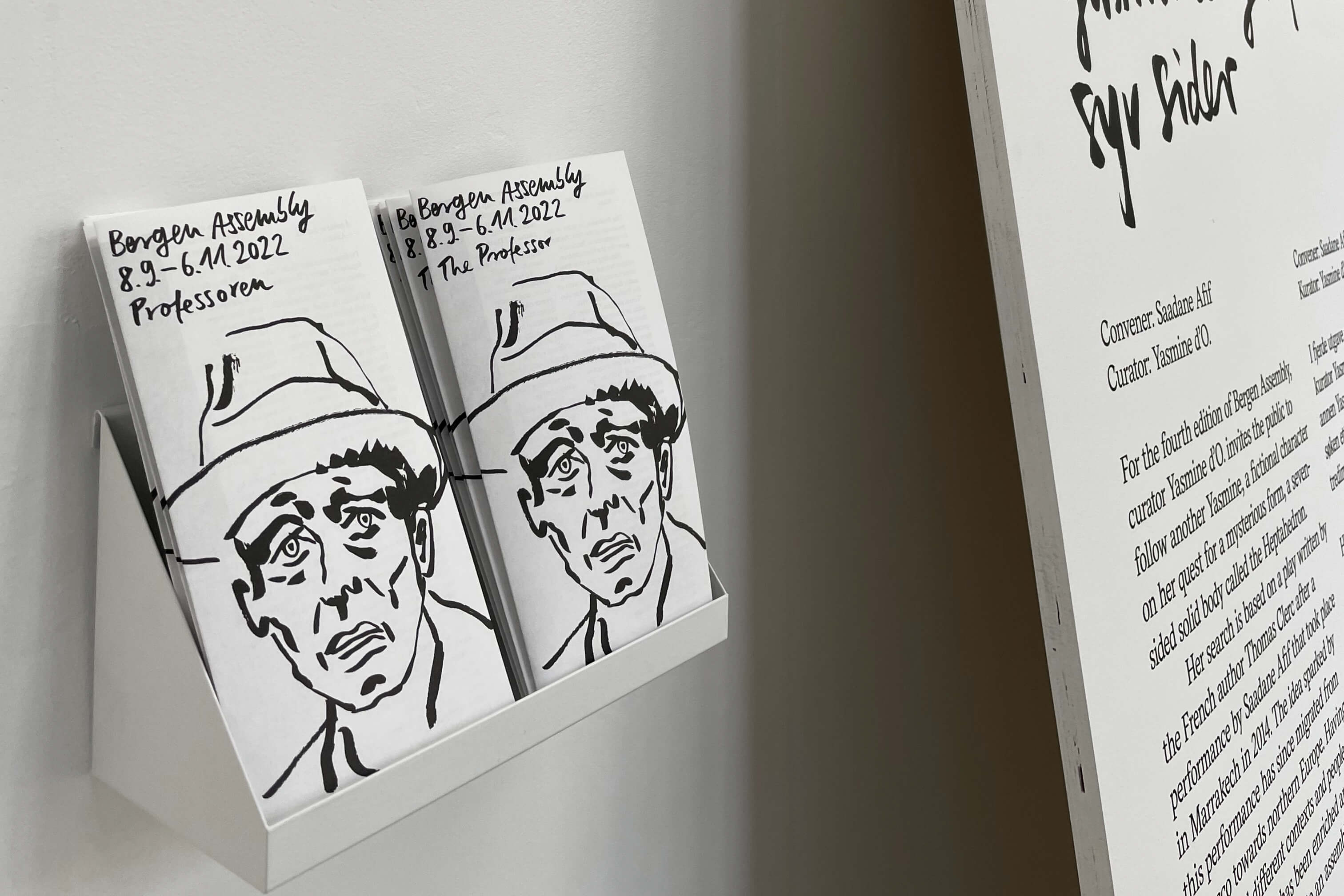 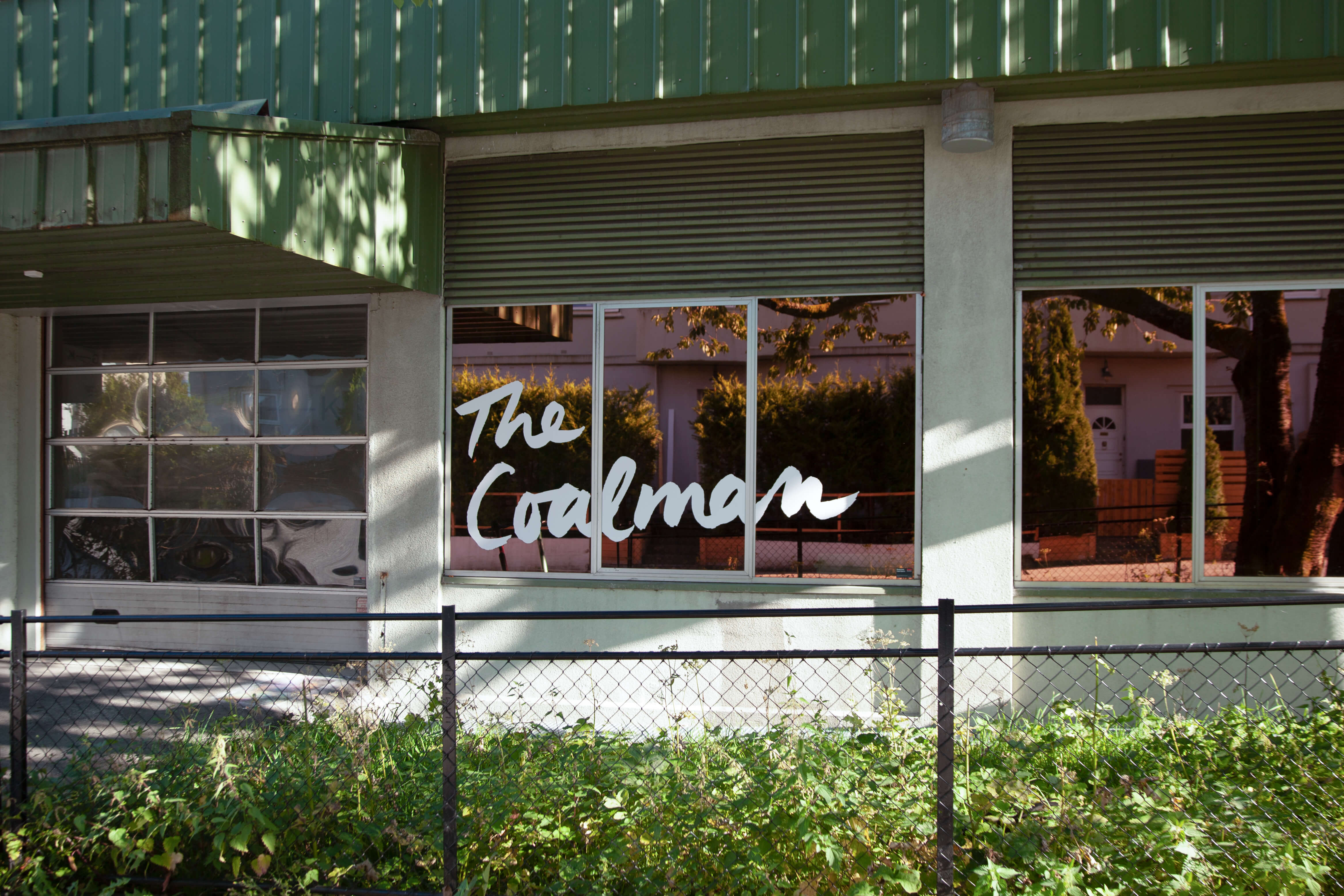 If artists develop out of themselves, so to speak, what about designers? How do they become fully formed? Often, the designer’s process of discovery happens in tandem with the client—taking on different perspectives and finding a balance between many people’s needs. For this year’s Bergen Assembly, not only have Neue Gestaltung designed the visual identity for the exhibition as a whole, they have also produced seven issues of Side Magazine, giving shape to each of the characters encountered by Yasmine in her search for the Heptahedron. They devised portraits based on seven real individuals—Joseph Beuys, Jeff Koons, Sophie Calle, Nnedi Okorafor, Katharina Sieverding, Jannis Kounellis, and Hans Ulrich Obrist—who can be seen as archetypes symbolically connected to the seven faces of that ever-mysterious shape, the Hepthahedron.

At the Bergen Kunsthall, Neue Gestaltung presents a meta-exhibition as an introduction to this cast of characters—in order of appearance, Yasmine, the Professor, the Bonimenteur, the Moped Rider, the Fortune Teller, an Acrobats, the Coalman, and the Tourist.

Neue Gestaltung’s aim was to transform the story of Yasmine, as originally outlined in Thomas Clerc’s play The Heptahedron (written in 2017), into something tangible, building a bridge from the abstract into figurative. They initially created a wide-ranging series of different portraits: abstract, constructivist, typographic, semi-illustrative, figurative, and pictorial, eventually settling on figuratively implementing Yasmine’s story.

Understanding their role as “transmitters” between disparate positions, Neue Gestaltung harnessed visual and haptic elements to further shape their approach. Exhibited as part of the framework of the Bonimenteur, eight curtains are draped from ceiling to floor, each offering a visual introduction to a character; each curtain corresponds to the sequences and acts in Clerc’s play. As such, the characters gather together in one space, blowing in the breeze while speaking for themselves. This choreographic staging is both a dance between the real and imagined, and a journey into a world that Yasmine d’O. has long sought to reveal: that of the Heptahedron.

Neue Gestaltung is a Berlin-based independent design company founded in 2000 by Eva Wendel and Pit Stenkhoff. Working together since 1995, they both studied at the University of Design Schwaebisch Gmuend, a school influenced by the Bauhaus (“form follows function”), and the Ulm School of Design (HfG).

Neue Gestaltung’s approach to design focuses on typography and aims to create a clear and distinctive visual narrative using form, colour, type, and code. Neue Gestaltung believe that design is more critical today than ever, given the staging, messaging, and representations that we encounter in everyday life. Describing the role of design in contemporary society, they say, “Today, everything is designed; everyone is their own designer, and everyone is an expert in their production,” which means our choice of medium is arguably more important for the reception of a message than the content itself.

Neue Gestaltung consider themselves to be transmitters between different positions. With a combination of art direction, editorial design, corporate identity work, and innovative digital applications, they engage in both cultural and commercial projects to develop various design solutions with diverse methods and tools.

Neue Gestaltung have won numerous national and international awards, including Gold at European Design Awards in June 2022 for their work on Side Magazine, which is conceived as a site of research for Yasmine and the Seven Faces of the Heptahedron, with seven issues published in advance of the fourth edition of the Bergen Assembly 2022.